Last night I was in the basement getting ready to load the washer when I heard a cat yowling. We don’t have a cat. They do have an inside cat next door. The sound was not coming from their cellar though, it was coming from outside. Felix never goes outside…wait, yes he does. He will go out once in a while with them and usually doesn’t leave the back porch steps.

“Felix is that you?”

“Did you get left outside?”

It was nice and warm in the late afternoon and early evening.  I’m betting he slipped out when they had the dogs out last and they didn’t notice him.  He is a black cat after all and practically invisible in the dark. He’s now inside and happy. 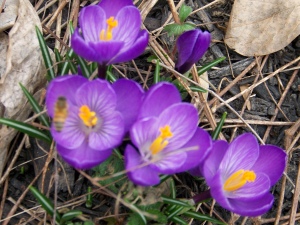 When I managed the pet store I had a regular customer who we kept supplied with goldfish of a certain color and size, one at a time.  No matter how well we instructed her on the care and feeding of goldfish, her son managed to kill about one a week.

After the third week, she explained it to me.

You see her son had Down’s syndrome and took great enjoyment in feeding his little pet.  Yes, he fed the fish several times a day and no matter how often she changed the water, eventually the poor over-fed fish would die.  She would sneak the tiny corpse out and replace it with a live fish while he was at school.

When she would come in for a new fish, I would sort through a huge tank of goldfish to find one the right shade of orange.  We would joke about what number Finter this one was.

Would you have the heart to tell the sweet boy that he killed his fish?  My weekly hunt for a new Finter was easy much easier than her job would be if he ever caught on.

You all have a good one and stay warm!

I don’t usually promote people’s products, but a fellow Bull Terrier owner makes these great collars.  These are custom-made, she has many patterns to choose from (so don’t choose ours LOL!), and you can get either regular buckle collars or martingale.  She also makes other products.  Soon, she hopes to be listing her products on Etsy. 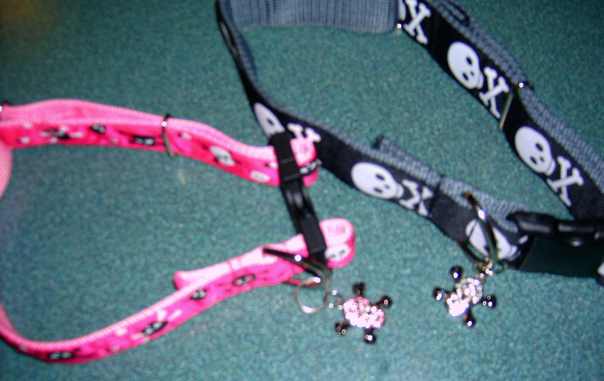 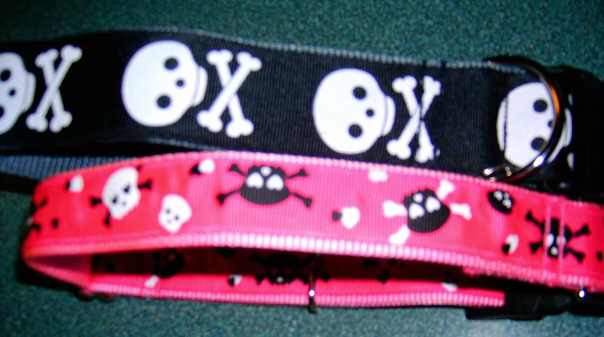 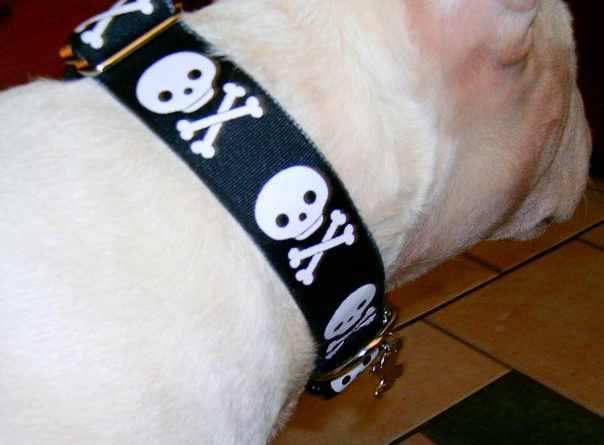 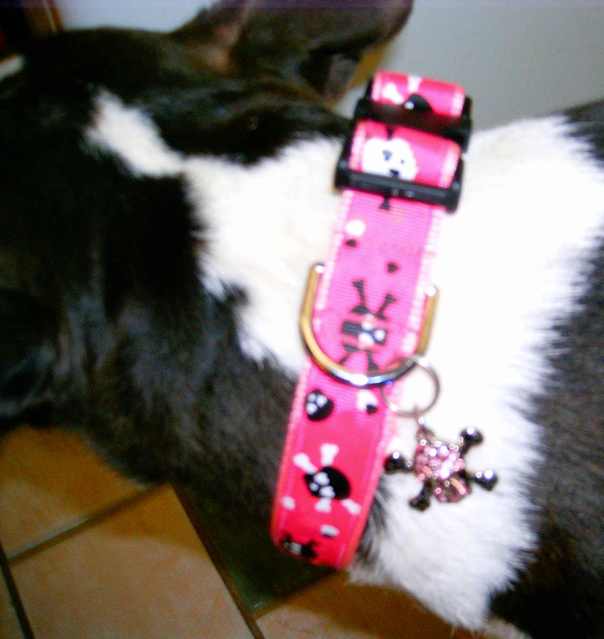 This lovely girl needs a ‘her only’ forever home.

Hello World, My name is Missy, you can call me Princess, SassyPants, Sassinator, luvbug or Missy. I love to run and play, snuggle on the couch or in bed and listen to your stories, or just watch a movie together. I am crate trained and house broken, I love to chew on antlers and I think Bully sticks are the bestest. I have good manners in the house and on the leash, but you have to earn my respect. I’m pretty young, probably 16-18 months old, so I still have a lot of shenanigans left in me. I have no guarding issues with my treats or my food. I do need to be the only pet as I’m a bit animal aggressive. I can get a bit obsessive about my ballie so best not to let me have it for long times. I am a total ham for the camera, and I can be quite the talker too. I am looking for a human to call my own…cud it be you???? Please contact Laura Jenkins at https://www.facebook.com/rcbtr and fill out an application…you know you love me, so what are you waiting for???? Or PM my mom, n she will give you more details…Hurry, I’m too cute won’t be sitting here for long.

Silliness abounds even where there are grownups…

I am amazed at what can entertain grownups for hours.  I am included in that group only by age…I refuse to grow up.  Anyway, a group I belong to on Facebook got started on Frankenweenie-fying our dogs.  It’s a riot and addictive.  By the time I got away from the page to work on this, our group had 62 of our dogs and two people Frankenweenie-fied.

The pictures are so silly most of us spent the night giggling like fools.  Yes, it is amazing what we can find amusing.

Many years ago we had a Siamese cat who should’ve been named Diana for her hunting skills.  However, she was named Snoopy because she couldn’t resist checking everything out from her first day with us.   She wore a bell and yet continued to gift us with many a dead animal.  Snoopy did learn that killing birds brought nothing but disapproval from us so she restricted her hunting to small furry creatures.

When she stalked her prey you never heard that bell ring.  Fagin’s juvenile crew of pick pockets had nothing on her keep-the-bell-from-ringing skill.  That little seven pound cat could run like hell and keep the bell silent.  You only heard that bell of hers if she wanted you to hear it.

I often observed her stalking some creature with the bell as silent as if she’d had a fifth paw to hold over it.  Then when I’d call her she come running with bell making all sorts of noise as if we hadn’t seen her silent sneak.  Once The Curmudgeon and I married, she came with me and became a house cat.  That never stopped her from hunting–she kept our house mouse free until she died at a little over twenty years of age. 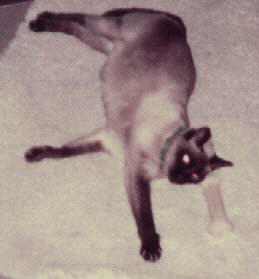 Entered Patty and her Daddy in a contest

Copy and paste the link into your browser and go vote for them!  Patty needs a new collar.

Was that an earthquake?

My built-in Bullie earthquakes regularly move the stuff in my curio cabinet.  It’s reached the point where I have actually taken that sticky stuff you find on credit cards and things they send you in the mail and put it on the bottom of a few of my knickknacks to keep them in place.

It sort of works.  However, when I go to dust I have to pull it off the bottoms so I can move the things.

The curio cabinet’s glass is also in constant danger.  Have you ever seen a Bull Terrier prance about with a large bone in her moth, whipping her head from side to side in a victory dance?  “Whee, I stole my brother’s bone!”

Have you ever watched a Bull Terrier hucklebutt and nearly brain himself on a glass door?

Even the Curmudgeon knows better than to wake me before noon.  Heck, I go to bed around five a.m.  However, the last couple of mornings a certain white dog has taken it upon himself to become my new alarm clock.

Yesterday, he wandered upstairs and flopped outside my bedroom door at eleven.  He’s not the sharpest tack in the cork board.  He began by sighing loudly, then he rattled the door a few times.  When that didn’t work, he sighed again.  I knew if I didn’t get up and let him in the whining would begin next.

So there I was curled up in bed with a happy white dog on his back getting his tummy tickled…and people say they are dumb animals.

Elena was up and walking under supervision yesterday–three cheers!

You all have a good one.

They don’t want to go to sleep

It’s been one of those nights.  Neither dog will go to sleep.  If it isn’t one it’s the other.

Posted in Dog related, My blog

Since it’s my birthday I’m going to be lazy…

As soon as we saw Hickory walk into the best in show ring DH and I both said, “There’s the winner.”  We were right.  She was the perfect example of the Scottish deerhound standard.  Her movement was breath taking.

Our hearts will always belong to the terrier group, especially Bull Terriers, but we know a good dog when we see one.  Hickory stood out a little above the rest of the competition.

Congratulations to Hickory, her breeders, owners, and especially her brilliant handler.  Three cheers for the first time ever Westminster best in show win for a Scottish deerhound.